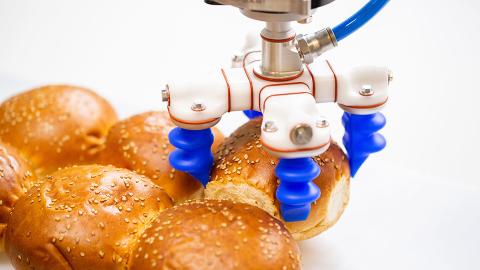 Count Tyson Foods and Johnsonville as among those bullish on the potential of incredibly nimble robots.

Johnsonville’s similar arm, Johnsonville Ventures, was a new investor to the provider, but both companies are existing Soft Robotics customers.

Soft Robotics plans to use this latest round to expand commercial deployment of its mGripAI robotic picking solutions, which marry 3D vision and artificial intelligence with a patented soft grasping technology to supply robots with hand-eye coordination that it promises to be at the same level as humans.

For consumer goods companies, they’re meant to be a potential option for bulk-picking and prepared food operations, as well as in reducing food waste. Marel, a food processing company, was also a new investor.

Kevin Ladwig, managing director of Johnsonville Ventures, said in a statement that Soft Robotics’ pick-and-place systems are applicable to a number of primary and secondary processing operations.

“Applications that reduce repetitive motion and improve employee safety, in addition to enhancing productivity, are welcomed improvements for any operation,” he noted.

"At Tyson, we are continually exploring new areas in automation that can enhance safety and increase the productivity of our team members," added Rahul Ray, Tyson Ventures senior director. "Soft Robotics' revolutionary robotic technology, computer vision and AI platform have the potential to transform the food industry and will play a key role in any company's automation journey."

Tyson is investing heavily in automation as part of a productivity plan expected to save $1 billion by the end of fiscal 2023 — a year earlier than initially planned, the company announced this week. Key goals of the program include leveraging automation to alleviate both difficult and repetitive jobs with high turnover, such as chicken deboning.

More on Robotics and Automation

Hear the latest analyst insights on consumer spending and traffic on Black Friday and Cyber Monday that will help you keep in tune with your consumers this holiday shopping season.

How one Swiss institution sought out to reconnect with customers by tapping into the emerging focus on “financial well-being” and reimagining its retail banking experience to inspire personal progress.

Retail Leader Pro talks to Frances Valentine CEO and Co-founder Elyce Arons about the importance of sparking joy and inclusivity in retail.

The company’s supply chain transformation ties into a larger strategy to improve data visibility and communication across its departments.