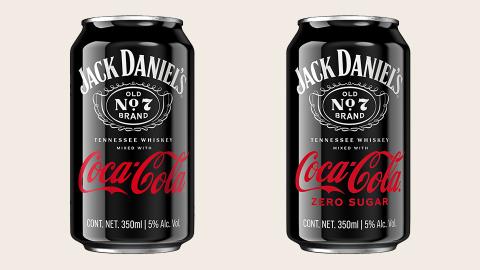 The drink will be offered in regular and Zero Sugar flavors.

The Coca-Cola Company is moving more deeply into the ready-to-drink (RTD) alcohol beverage market through a new partnership with Brown-Forman.

The companies are launching a pre-mixed Jack & Coke RTD cocktail, made with, naturally, Jack Daniel’s Tennessee Whiskey and Coca-Cola. Initially launching in Mexico at the end of this year, the drink is slated to be sold globally.

Both the can and packaging will feature the Jack Daniel’s and Coca-Cola branding. A Zero Sugar version will also be available.

Coca-Cola first experimented with the RTD alcohol beverage market in Japan in 2018 with the Lemon-Dou brand. Its strategy hinges upon three segments of flavored alcohol beverages: hard seltzers, hard alternatives, and pre-mixed cocktails.

The global RTD cocktails market is expected to reach $1.78 billion, according to Grand View Research, up from $714.8 million in 2020. Data and tech provider SPINS report that RTD cocktails have outperformed spirits and liquor for the past two years, increasing 143% over two years.

RTD cocktails have grown 37% in the conventional channels and 61% in the natural enhanced channels, according to SPINS, as RTD cocktails allow for easy and convenient at-home mixology. Hard seltzer sales, meanwhile, are up 11% in multi-outlet channel stores — outpacing beer in growth for the second year in a row.

In addition to Lemon-Dou, Coca-Cola offers Topo Chico Hard Seltzer in more than 20 markets, as well as Schweppes pre-mixed cocktails in Brazil. In the United States, Coca-Cola partnered earlier this year with Constellation Brands to bring an alcohol version of its Fresca brand to market, as well as Molson Coors for Simply Spiked Lemonade.

Khalil Younes, president of emerging categories at Coca-Cola, described the company’s efforts in a statement as “strategically experimenting and learning in alcohol.”

“We are excited about the opportunities, but we also know it will require effort and patience,” he noted.

In addition to Jack Daniel’s, Brown-Forman includes such brands as Woodford Reserve, Old Forester, and Coopers’ Craft in its portfolio. Lawson Whiting, its CEO and president, said the partnership will enable the company to accelerate its expansion and grow globally.